Status
Not open for further replies.

Tony Elliott has my vote.

SoMsJacket said:
From a buddy of mine that is close to the Clemson program. Venables is not head coaching material. Said something about "a few screws loose"
Click to expand...

WOW. Look above your quote...I was literally going to say something about Mike Houston and GT. I think Houston should have waited a bit. He's a VERY good coach a better program would have gone after him.
Click to expand...

He made a huge mistake

Jeff Monken is the best candidate to replace CPJ. Change my mind.

takethepoints said:
I said it above, so I'll say it again: we need to hire Bohannon and right now.

The other candidates will either be unable to make use of the players we now have - and we've got some good ones - or be too expensive. First, if we hire someone who will come in and try to use players recruited for a system offense to run an O premised on having a few "playmakers", we will be looking at multiple years of disastrous seasons. I keep hearing about "football irrelevancy" here; have a string of 3 - 9 years and see where we end up. We have been able to keep the program steady and get to great heights occasionally largely because we have been recruited for a system O that allows us to specialize our recruiting so that we get players we can use effectively. Someone like Malzahn or Wisenhunt or Satterfield would be lost at Tech and unable to get the players they need to run their programs. Bohannon could step right in without a hiccup.

Second, we could get him for a decent price. We need every extra penny for program development now. Someone like Malzahn would be another (and less successful) Paul Hewitt.

This is, as some above have said, a big decision, especially with recruiting in a sensitive stage. Hire Bohannon (provided he'd leave KSU, of course) and we'll get the continuity we need. Bring in a "disruptor" and we'll end up the Sears-Roebuck of college football.
Click to expand...

You couldn't be more wrong. You're just upset because pj quit.

Yea ; Chad Morris the originator of Clemson's prolific offense is about to get run out of Arkansas in his first year; Elliott whuld be nothing but a clone of this; It goes back to the Gimmies and Joes Gt and Arkansas will never be able to recruit like Clemson so this offense means nothing 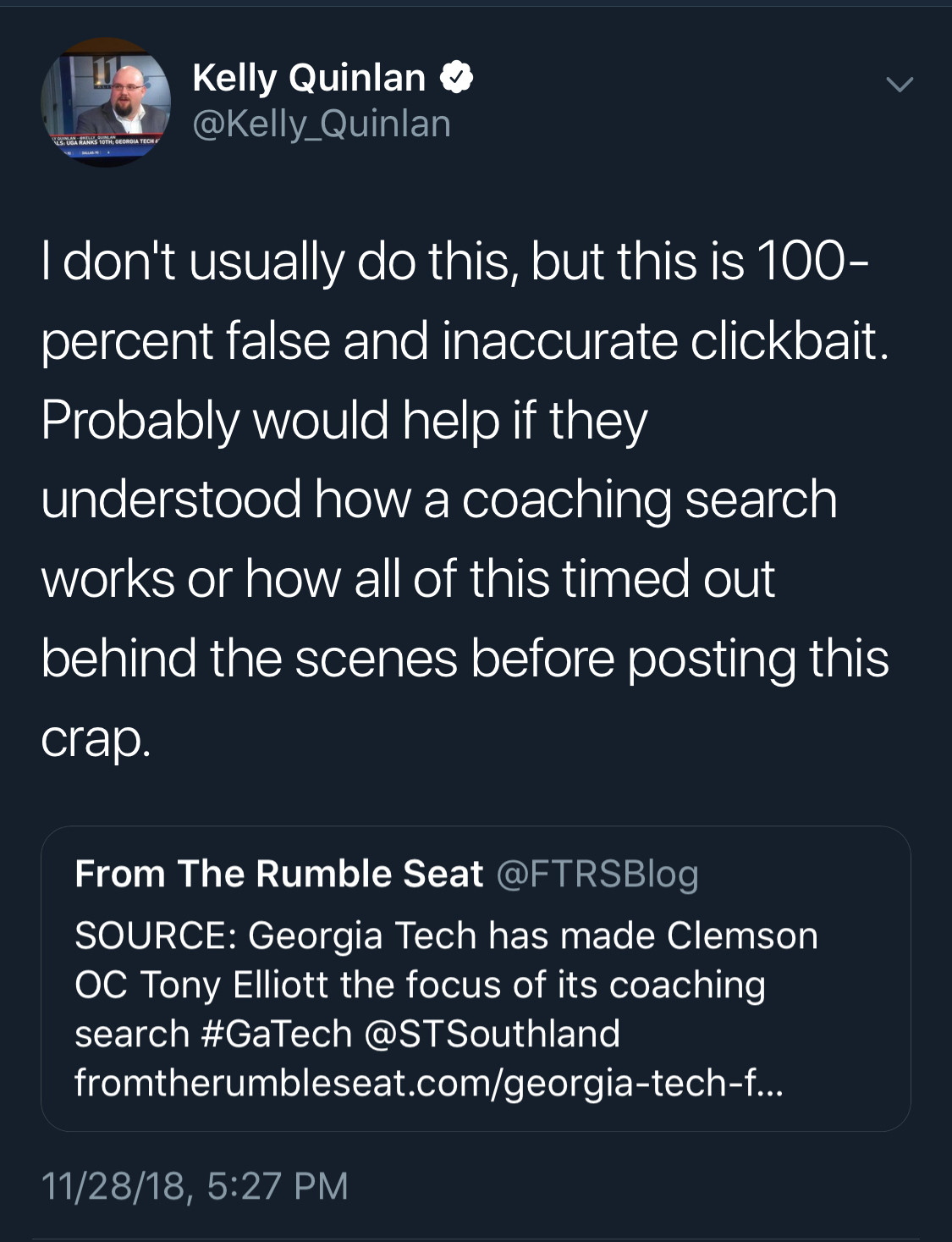 Well it isn’t like he broke the story in the first place. Kinda salty sounding.

Js-showman said:
This is the reason they cite:
Elliott graduated from Clemson in 2002 with a bachelor’s degree in industrial engineering and a team-high 3.55 GPA, a profile which certainly fits Georgia Tech’s culture.

There is whole lot of difference between an engineering degree from Tech and almost any other school.

Bring an offensive coordinator at Clemson does not seem like a great fit for me.

Not a fan of a D1A program coach .It’s a bigger leap than many think.

I have absolutely nothing against hiring a Tech man and know it will generate interest from a certain crowd. It all depends on the staff.

I really prefer a guy like Kiffen. He will generate a ton of interest around our program and knows how to recruit. He has grown up. Big time D1 experience.

If want continuity, I think CAM is our guy. He also brings a defensive mindset some want on here.

MidnightJacket said:
Give me an ace recruiter who is hungry and knows talented coordinators when he sees them.
Click to expand...

We're a year late, but would have LOVED to have Joe Moorhead here. Unfortunately, Miss State knew he was a good coach and hired him from Penn State last year.

Check out @ConorKrebs’s Tweet: I am 100% behind this if this happens...need these guys it only gets better from recruiting people!

West Virginia OC Jake Spavital would be an interesting hire

If Saban wants a real challenge, he should come to Tech.

I think we have to hire a head coach that’s a known expert on either side of the ball. We can’t have a ceo style coach. We don’t have the money to do so unless we get a super cheap ceo type / recruiter coach (free up money to surround him w stud OC and DC, a la Dabo when he got promoted)

I actually like Gus as a coach. No one can deny he’s an amazing offensive mind. Hell, he’s one year removed from the SEC championship. He has the misfortune of coaching in the toughest division in football against a once in a generation coach (that coaches their rival) Auburn is crazy to cut him loose so soon. We also will get a deal because auburn would pay a portion of his salary. Plus we have the QB today to make his system work. We have a few of them in fact.

Alternatively, we go deep in the defensive side of the ball and hire firey guy that can instill a culture at tech for defense. Start every athlete on defense first. That being said, AD finds money and makes him hire an option guru, spread or triple. No “buddy hiring” on this one, we need someone that can surprise other teams, an equalizer offense.

Gus is a reach of course but I think the approach/strategy is sound. No Whisenhunt, no grey hair, “well back in my day” kind of guy.

He was hired by Texas State

THWG said:
He was hired by Texas State
Click to expand...

Status
Not open for further replies.