this year's slots and values compared to last year's (inflation and all).... 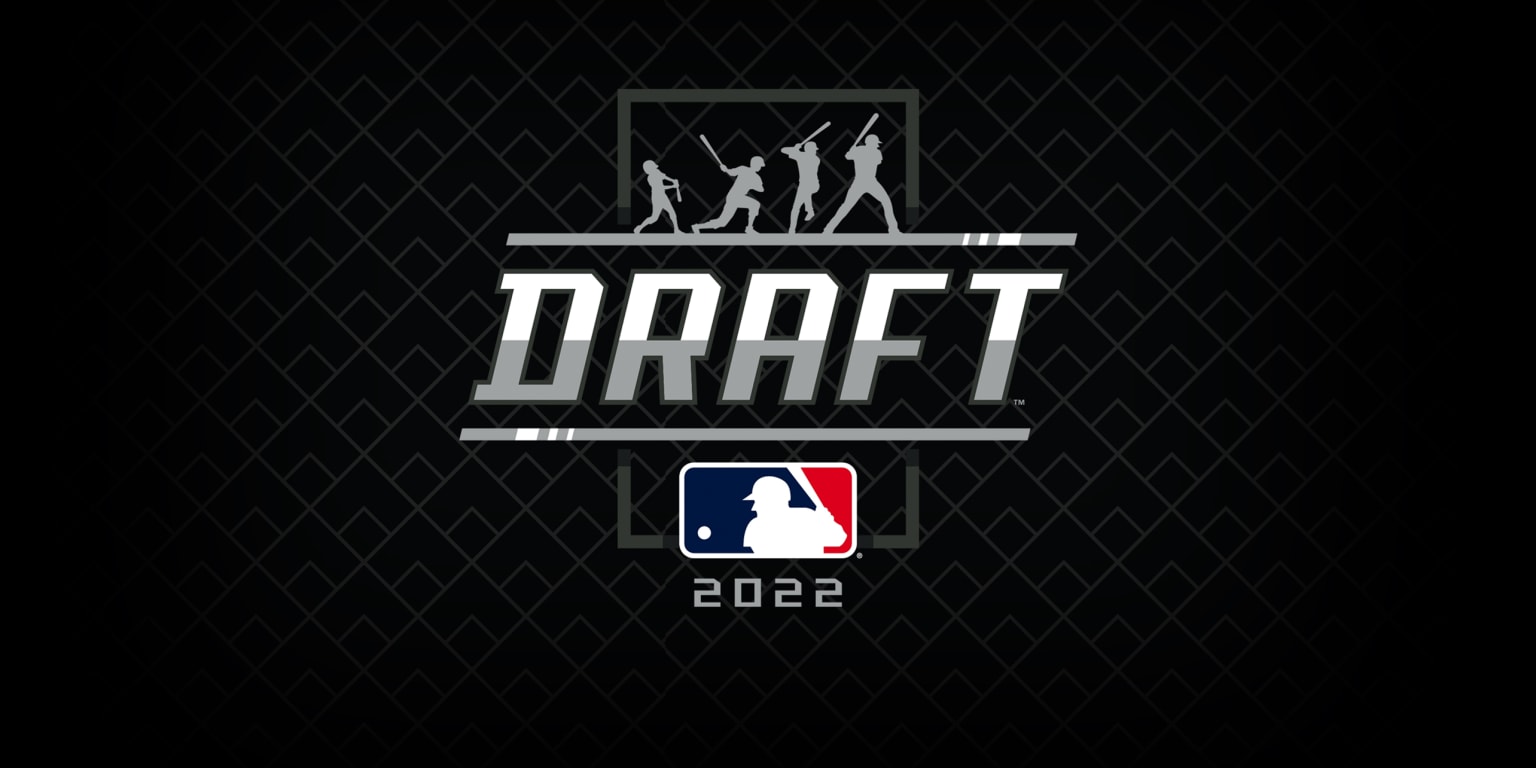 The Orioles not only had the No. 1 overall pick in the 2022 Draft, but they also have the second-largest bonus pool in Draft history. Baltimore's top selection comes with an assigned value of $8,846,900, the second-highest since the bonus pool era began in 2012, trailing only the $9,015,000 worth 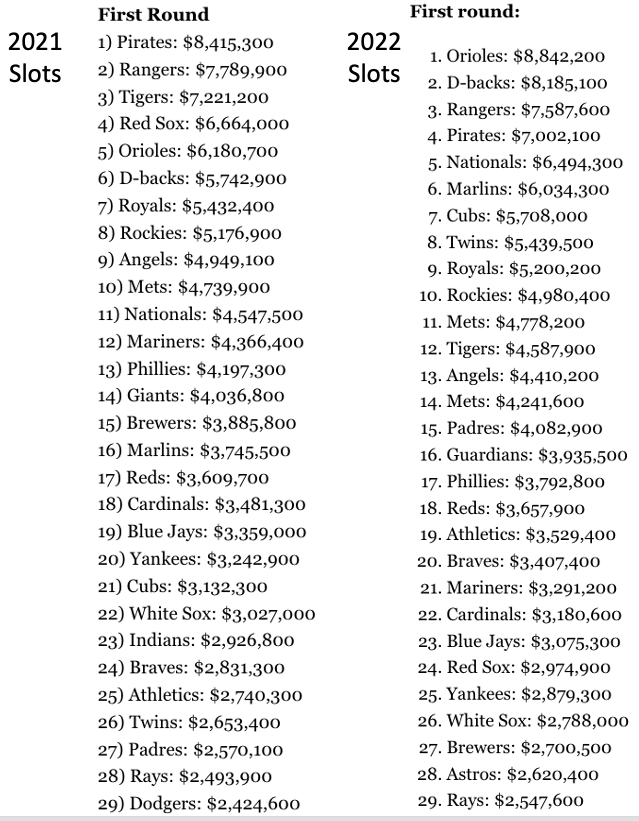 First round ends at $2M 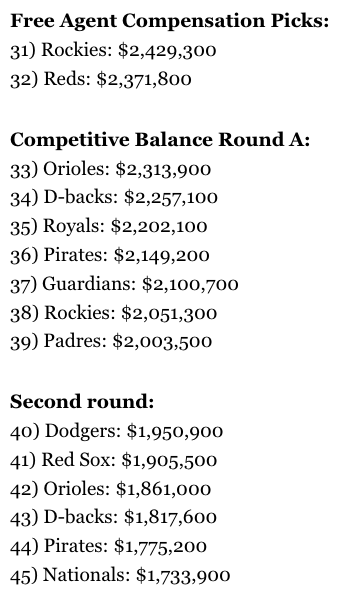 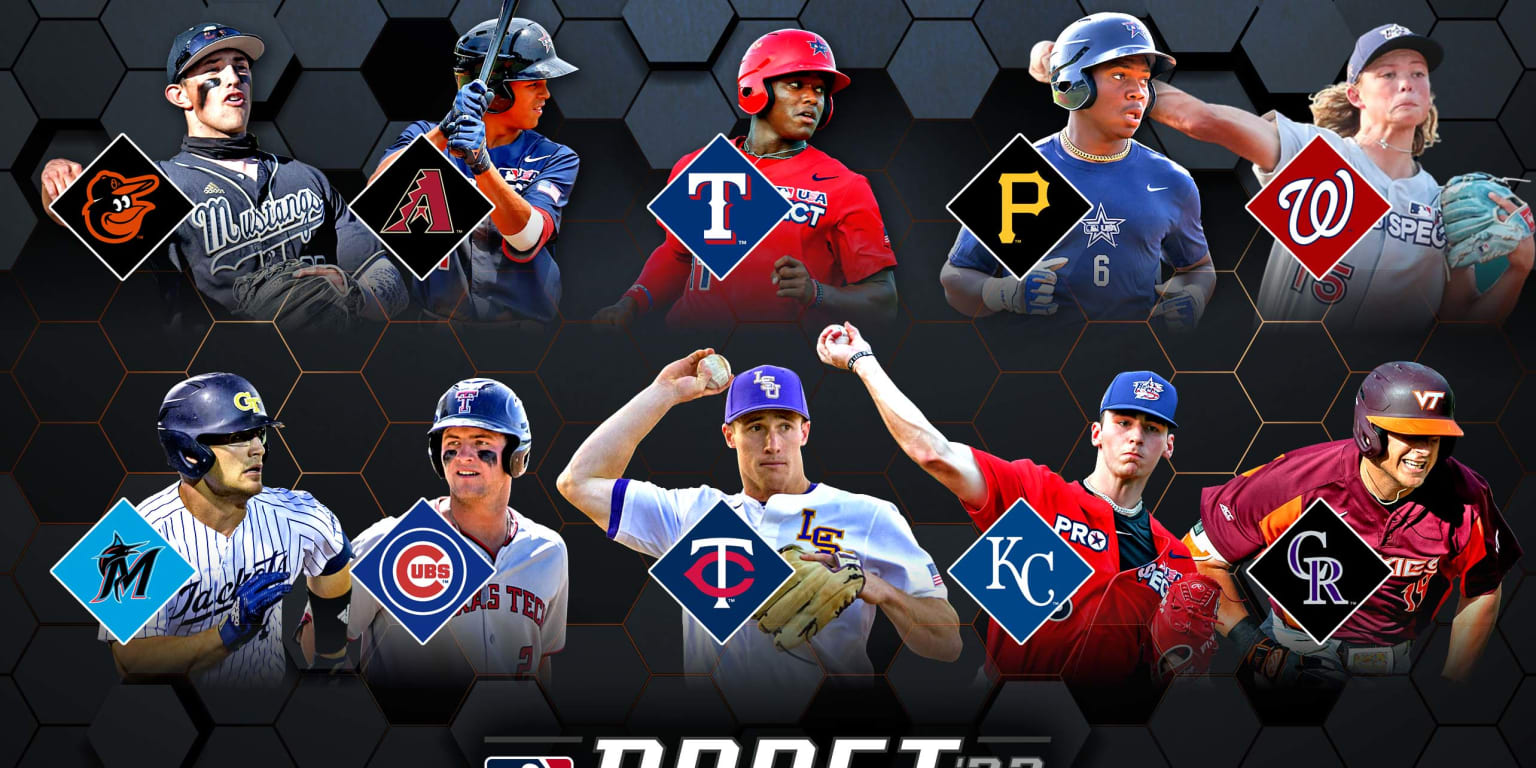 Some say Draft season commences when the amateur year gets underway in late winter/early spring. Others think that the new that rankings come out, like the Draft Top 150 we dropped earlier this week, are the crocuses of the season. But for Jim Callis and myself, in many ways things 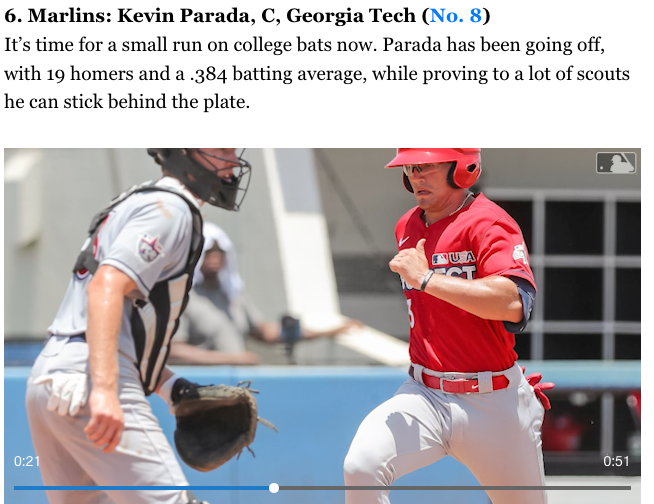 Kumar Rocker #22 to the Cardinals

Our newest ranking of the game’s Top 100 prospects, now including 2022 draft picks.

I am not seeing anyone from last years draft class in the top 100. Let me know who you are looking for

This years draft…. For our gang….

The 2022 Top 100 Prospects list is a culmination of all of our prospect reporting of the past 12 months.

I didn't click it to read, since I don't have a BA membership

. It was confusing by title, I thought the same thing. Also I thought Waddell might have snuck in the top 100 with how he has played 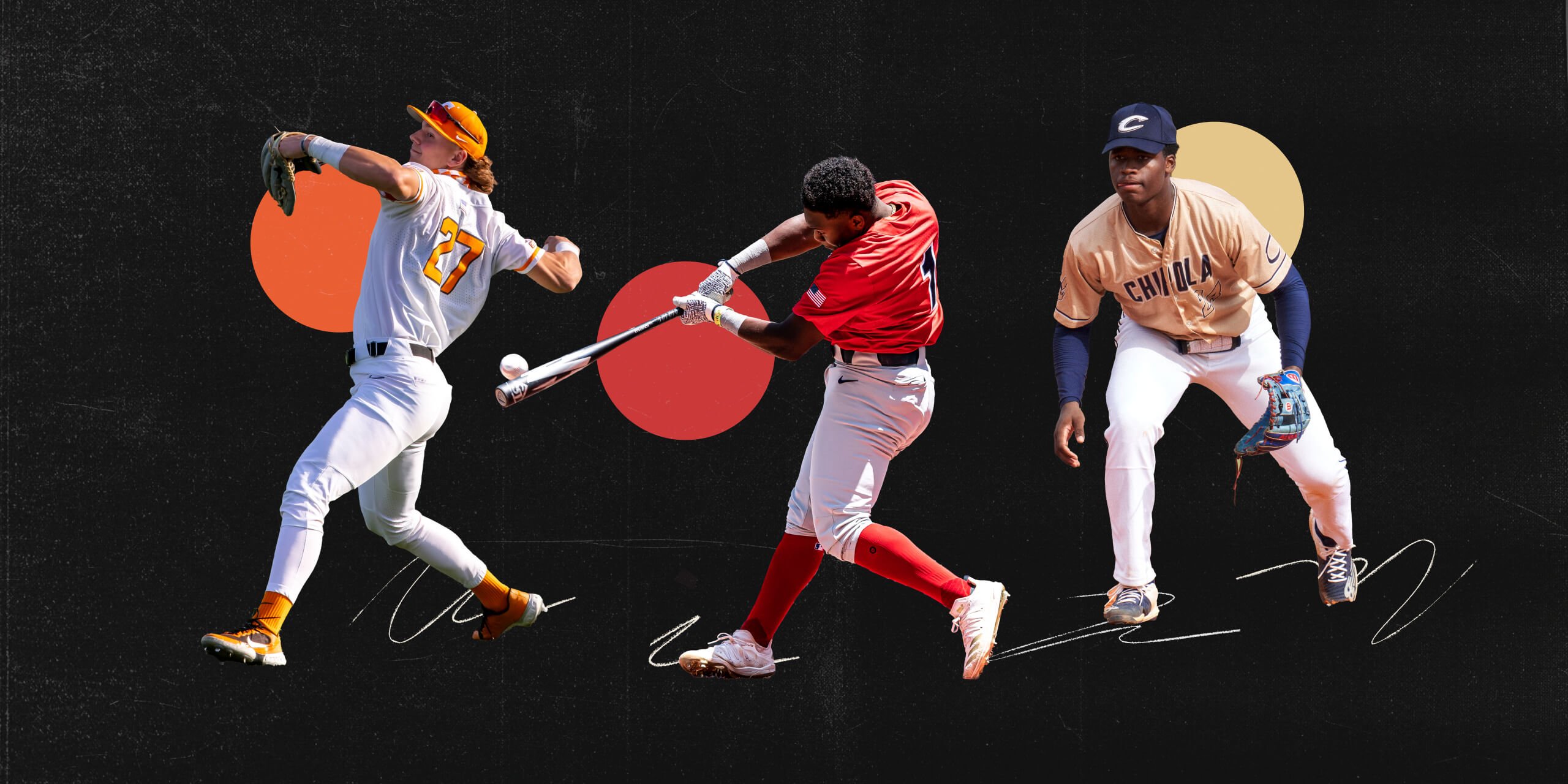 Top 100 prospects for the MLB Draft

Druw Jones is the clear No. 1, as there is a noticeable lack of pitching at the top of the ranking. 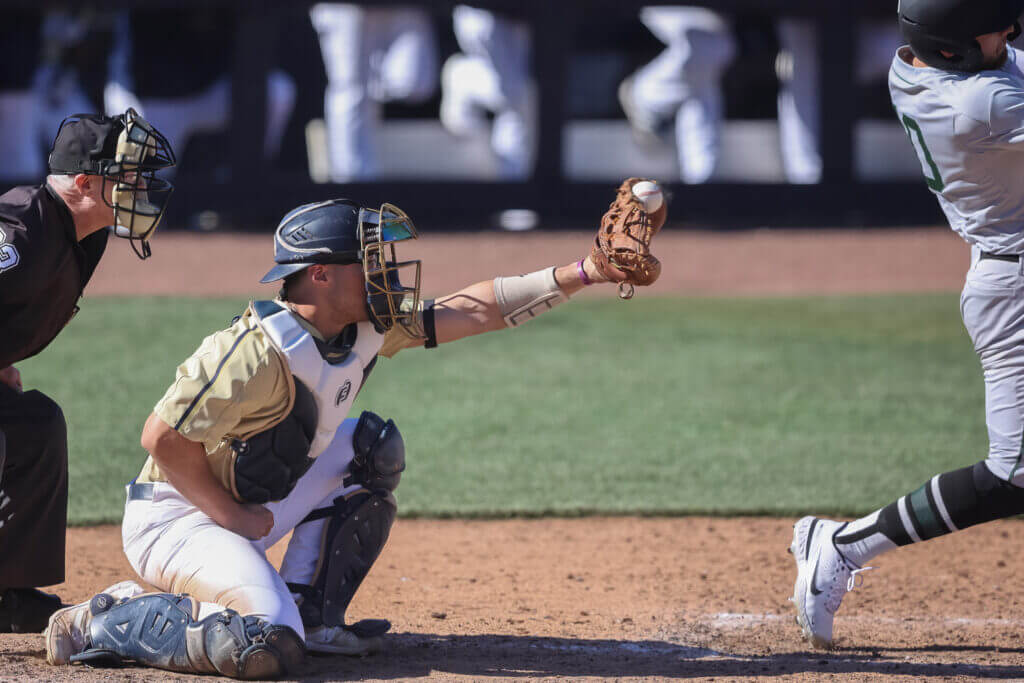 Parada's bat is first-round caliber on its own, but now he's pairing it with improved defensive skills behind the plate.

FittedJacket said:
FSU and Clemson will set in motion a series of changes which presumptively lead to opening of other power 5 jobs such as Notre Dame and Michigan just as an example. Should be an interesting couple of weeks as coaches will want to finalize rosters as the transfer portal closes June 30th, and scholarship submissions must be made to the schools’ athletic department by July 1st.
Click to expand...

I'd forgotten about the portal "closing" on June 30th. Actually stays open, but since player loses ability to play the following year, I agree it's effectively closed. 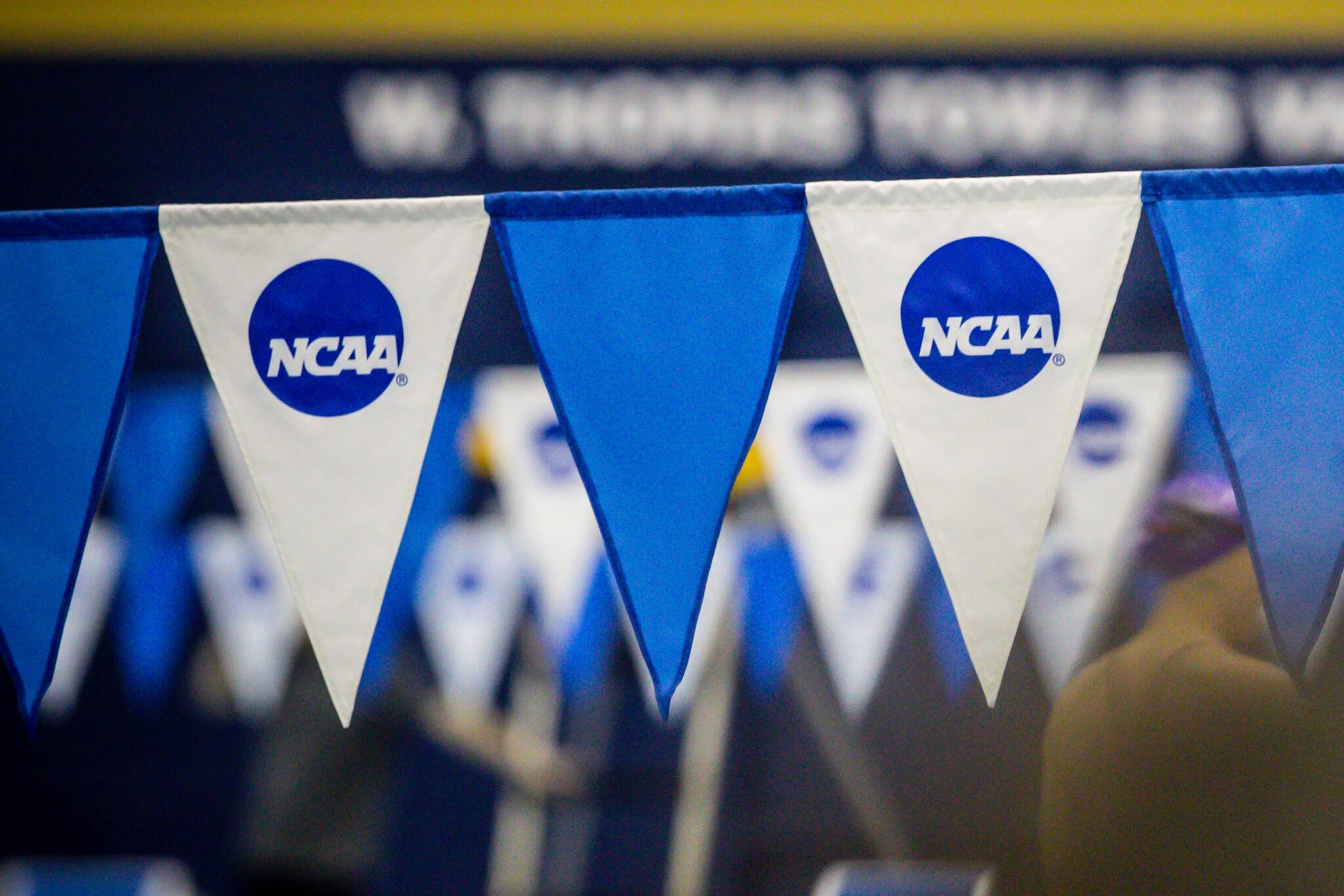 The NCAA Transfer Portal Deadline & What It Means For Student-Athletes

With the May 1 deadline passing, student-athletes entering the NCAA transfer portal won't be eligible to compete next season barring a waiver exemption.

With the MLB draft starting 17 July, that makes player decisions even harder since they don't know what the elite team mates draft status is and thus position openings.

Too many variables in this one for me

Samol is the only signee I saw.

Interesting. Looks like they’re doing a much better job of getting actual prospects to the draft combine. Last year was the first year they did it, and it was mostly fringe draftees or mid to late round guys. This year they’ve got a lot of bonafide first rounders according to that list.

5 of the top 10 prospects, 31 of the top 50. I’m sure there’s a few who would go but are either going to Omaha or still finishing up Supers. Good to see dudes from all levels too. HS, JUCO, mid-major D1s, and powerhouse D1s. Maybe it will gain some traction and make the baseball draft more popular in the media, and help grow interest in both the college and HS levels, as well as the game in general.

so is there a legitimate chance that any of the above return to GT in order to improve their draft status? I think they are all classified as sophomores (rising juniors) but with 3 years of college experience. Just looking at stats all have solid upward trajectories with great stats for 2022 ...... except Maxwell. His potential seems very obvious though.

Of all of them, I would like to have Simpson back the most I think. Just because he is so dynamic.

senoiajacket said:
so is there a legitimate chance that any of the above return to GT in order to improve their draft status? I think they are all classified as sophomores (rising juniors) but with 3 years of college experience. Just looking at stats all have solid upward trajectories with great stats for 2022 ...... except Maxwell. His potential seems very obvious though.

Of all of them, I would like to have Simpson back the most I think. Just because he is so dynamic.
Click to expand...

I'd love to see him stay but find it very unlikely. It would seem near impossible to improve at the plate and he would risk falling fast in the draft were he to fall back to even a .300 BA. The only scenario that I think would bring him back for another year is if he gets feedback from the scouts that they want to see him play centerfield which I truly believe is where he has the most potential. Can you imagine the number of hits to the gap that he could run down with his speed. I don't think he has a future at 2B IMO.
Share:
Facebook Twitter Reddit Pinterest Tumblr WhatsApp Email Share Link
Top