To Hell With Georgia

Well true story ...my daughter age 5 at the time went to kinder-garden wearing a nice blue gt sweat outfit.Kids at five poo poohed her and told her she was on wrong side............of course she changed and has not changed back.That is the power the pups have.You put on the G and you are in a brotherhood or something.Of course when they lose...........the dumpsters are full of red and black pom poms and hats.A tech fan is hard life but when we beat the pups its is so much fun.

Arches like that sometimes need a tension member at the top of its vertical supports if the outward thrust is not otherwise accounted for. A "beam" could serve that purpose.

LongforDodd said:
Arches like that sometimes need a tension member at the top of its vertical supports if the outward thrust is not otherwise accounted for. A "beam" could serve that purpose.
Click to expand...

That makes sense. What about the center column?

dressedcheeseside said:
That makes sense. What about the center column?
Click to expand...


A column, as pointed out in other replies, in this application is mostly useless. The column aids in supporting the beam but a beam is not a good example of engineering economy in the construction of an arch. Engineers like us look at this stuff and simply scratch our heads if we're trying to make engineering sense out of this thing that means so much to the red and black crowd. In looking at Cyptomcat's insertion of the Seal of Georgia earlier in this thread it appears to me that some architect working for the State of Georgia years ago was tasked with creating the arches for ugag (I surely hope it wasn't a GT grad) using the state Seal of Georgia as his/her inspiration. I think it's obvious that whoever created the state Seal was more of a graphic artist than an architect or engineer. Whoever was tasked with creating ugag's arches simply ran with it, not ever thinking that what they were doing would give us, who know better, so much pleasure in further critiquing their fine insttitution.

I went somewhere I would not normally go for this piece of info:

uga.edu/profile/arch
"For 150 years, the black iron arch—fired at the old Athens foundry—has served as the University of Georgia’s most visible symbol. Yet it is cloaked in intrigue, its past a mystery even to the most educated scholars.
Commissioned in 1856, the Arch was built sometime between then and 1858, but no one can say for sure the exact year it was constructed. It was part of the iron fence erected to secure the campus. Gates were part of the structure, closing off the passageway beneath the Arch at night. The gates disappeared sometime in 1885, likely the victim of a midnight prank. "

The UGA Arch is a symbol of oppressive mind control...

The center column was put in by a GT Engineer as a joke that UGAG would never get. 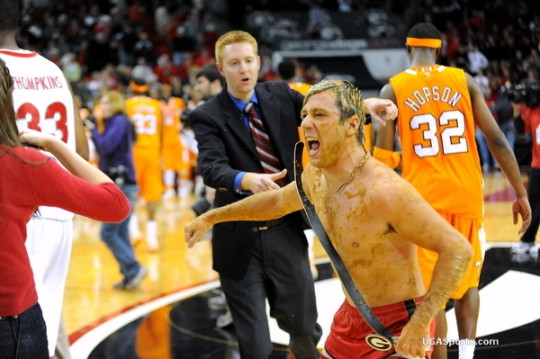 makes me think of the orc that came out of the breeding capsule in mordor.

I know his Mother is proud !

I guess we're not as irrelevant in the cesspool as some like to think:


I wonder who the brave soul was?


Makes me want to walk over there today with my GT cap on. Get over it Davie.

I wear my GT gear everytime I go to the cesspool and their campus. Gotta let the unwashed know there is light outside their circle of darkness.

Ask Jim Donnan if the Georgia fan base could care less about Georgia Tech.

Whiskey_Clear said:
I wear my GT gear everytime I go to the cesspool and their campus. Gotta let the unwashed know there is light outside their circle of darkness.
Click to expand...

Yeah good job ! When Tech beat georgie first time under Curry I went to Court with a black arm band on.......ga lawyers not happy but .......they got over it.

I've been to some really amazing games. But 2008 in Athens was probably the the most glorious. I was walking on cloud nine and the mutts all had their tails tucked where they belong.

1962 we are killing ga and best licks of the game are three fight or plays betweem ray rismiller of ga and or tackle.game was out of hand so we all looked at the fight.....we won that one too.Larry Stallings was our hero that day.
Share:
Facebook Twitter Reddit Pinterest Tumblr WhatsApp Email Share Link
Top