To Hell With Georgia

Eric said:
I am trying to get that fixed.

What all appears in a foreign language?
Click to expand...

I have no "Post New Thread" button here, but I do at home. Maybe that is a blessing.

If I can make a suggestion to the forum overlords it would be to change the language to English unless you want a bunch of posts about the Montreal Alouettes.
Click to expand...

Uh, What is the good work, Alex? 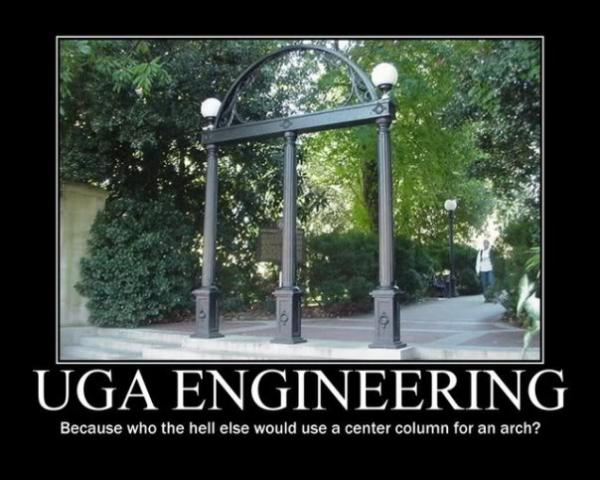 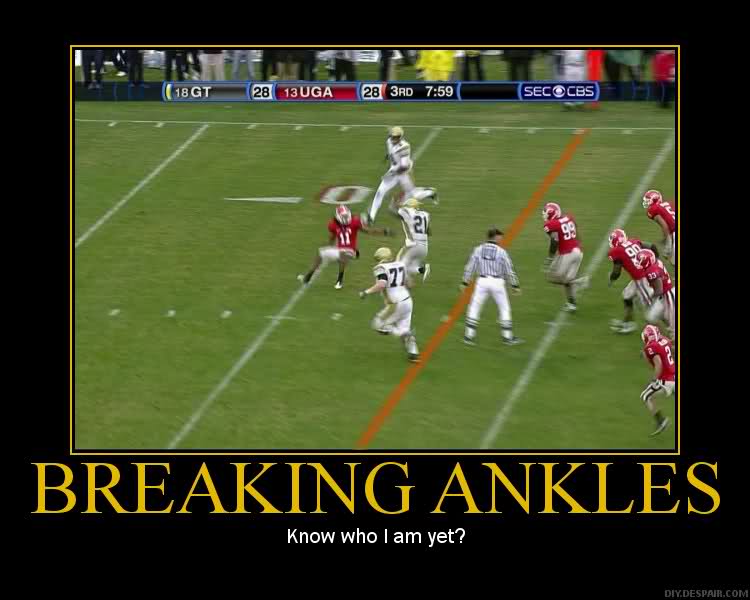 Correct me if I'm wrong, but you don't need the crossbeam, either? (If look closely, the center column and crossbeam combine to form a "T".)

dressedcheeseside said:
Correct me if I'm wrong, but you don't need the crossbeam, either? (If look closely, the center column and crossbeam combine to form a "T".)
Click to expand...

It's based on the Great Seal of the State of Georgia. I've always figured that the seal represented a building, with the constitution up top representing the powerful, efficient coffered dome resting on three branches of government. I'm no ARCH or CE, but in Roman architecture columns forming a square base with a coffered dome on top are fairly common and ingeniously lightweight and minimal. Of course, it's just like a mutt to see a 3D projection on a symbol and figure it must be 2D in real life, too. Kinda makes for a bad metaphor what with the three branches and the constitution thing.

Also, not enough hate going on in the off season.

To Hell With georgia.

This never gets old.

dressedcheeseside said:
Correct me if I'm wrong, but you don't need the crossbeam, either? (If look closely, the center column and crossbeam combine to form a "T".)
Click to expand...

That arch is one of the most retarded pieces of "architecture" I have ever seen. However, it is a perfect metaphor for the school it represents.

Arches were created thousands of years ago because they allow one to span a distance without exposing any of the components to structural tension - everything is in compression. Stone, concrete and other early construction materials can bear compression but fail when exposed to even modest loads in tension. The only problem with an arch is the lateral thrust at the base of each side of the arch - it wants to flatten so must be "pushed in" from each side. For doorway arches, the lateral thrust is absorbed by the wall itself whereas for arched-shaped roofs, flying buttresses solved the problem (think Notre Dame in Paris). For free-standing arches in three dimensions (e.g., a dome), the ground absorbs the lateral thrust.

The third way to counter the lateral thrust of an arch is to, instead of pushing each end in from the outside, is to pull each end together from the inside. This is how the "genius" (by UGa standards, anyway) who designed the UGa arch solved the problem. However, this is completely retarded. First of all, the arch is a "figurative arch" which bears no load and therefore has no lateral thrust to absorb. So not only did the UGa doofus use the most retarded solution, he apparently didn't realize that a non-load-bearing arch doesn't even need a solution. But let's give the UGa clown who designed this thing the benefit of the doubt and imagine that he wanted the arch to appear as though it were supporting something other than its own weight. Only problem there is that he picked the absolute worst building material to use for an arch that is supposed to appear, like most UGa students and grads, to be doing something its not - its job.

About the only thing an iron arch could support is the academic reputation of the school it serves as a gateway to: Nothing.

And as if spanning a metal arch with a metal beam wasn't colossally stupid enough, the UGa mensa architect had one more design flourish up he sleeve. Now, I ask you - what is the only way to top the idea of clogging the simple beauty of an arch by using a beam you don't need to support a load that you don't have? I got it! Let's support the beam with no load with a column in the middle! I mean why stop at running a beam right through the arch - let's run a column right through it too!

Here's my final thought on this atrocity of an arch: as someone pointed out earlier, the arch was apparently inspired from a graphic used in the state seal. I get the idea. Its the same idea and comes across about as successfully as when a car dealership pays some loser to dress up like Sponge Bob for a sales event. The state seal graphic works as a graphic. Sponge Bob works as a cartoon. Its a sad day when you encounter the results of those who, apparently, don't understand the distinction between lines on a page or on a screen and reality. But this is pretty much par for the course for all things UGa - its all for show; ill-conceived, poorly executed and a parody of itself - just like the school it represents.

Pansies have mighty Charleston Southern scheduled the week before we face them. Can't tell me they aren't scared.

They have won what 11 of 12 since Y2K (just wanted to dust off that old phrase) and have superior athletic talent, I don't think they are scared. 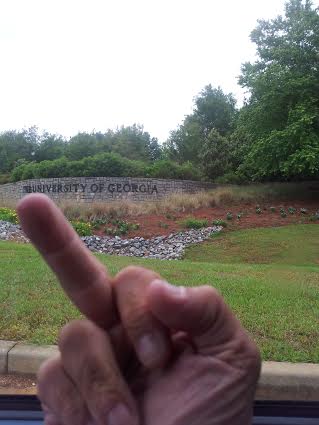 Gosh I hate ugag. I was at a local restaurant in huntsville, AL the other day on a date with my girlfriend and we had some obnoxious white family that sounded like they wanted to be from the hood or something. They had a 4ish year old daughter and the father was cussing up a storm while being very loud. Finally I turn around and the mother and father have on... You guessed it, ugag shirts. I just chuckled and went on with my business. My girlfriend now understands a little bit why I hate them.

MacDaddy2 said:
They have won what 11 of 12 since Y2K (just wanted to dust off that old phrase) and have superior athletic talent, I don't think they are scared.
Click to expand...

Fortunately we have Beesball where we have beaten the dwags 4 of the last 5 season series. UGAg has a recruiting advantage in baseball too, just not as large. It's where their physical ability can't overcome their stupidity.

I love beating georgie ! been hating them since the early fifties and still die a 1000 deaths when folks mention Theron Sapp ! Used to relish calling my georgie friends after whipping them and rubbing it in.......of course the whipping have been only abouat three years in duration past fifteen or so years but still fun.I still laugh at the georgie folks going down 95 to Jacksonville with pom poms signs etc and then after drill Sunday watching them pass me going back to Athens with no evidence of ever being a ga fan. 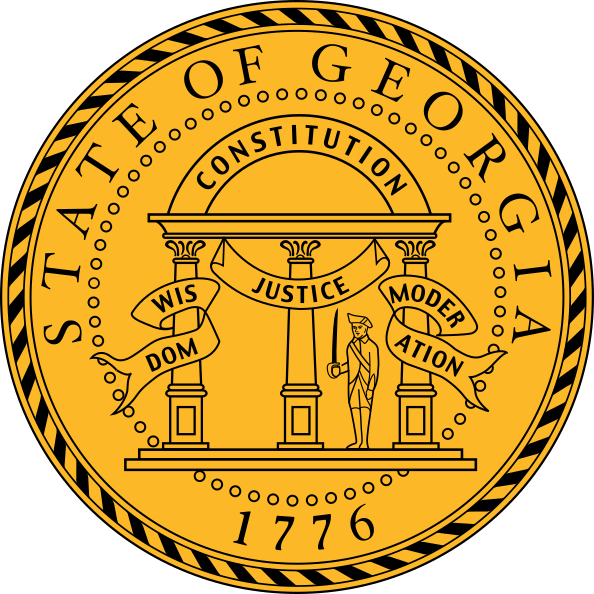 I worked ten years in the cesspool of Athens. It wasn't the best place for a vocal GT person like myself to be employed lol.. I despise UGAG and all it has to offer....