A couple of critical differences:

1. Wider splits, I think, in the VT game. Not much, but just a little bit more space between guard and tackle makes a huge difference, imo.
2. The VT defender is already lined up across from the B-gap from the get go. Not only that, but he times the snap perfectly. In the Spring game clip, Marcordes comes up from the LB spot and the timing is not the same, he actually hits the B gap after the snap. The VT guy hits the gap on the snap.
3. Also, the VT guy is a whole step to BC's left, whereas TM is basically head up on him at the snap.

I don't think there was much BC could have done to stop the penetration in the first vid given those differences.

Question: I can't believe this was the first time somebody tried to jump the b-gap on us. What did we do in previous years?

This one may be more comparable...

BC comes off so slow in that VT video he never had a chance. His hand is still on the ground when Vad has the ball a step back from the LOS, and the defender has already beaten him before he even stands up. 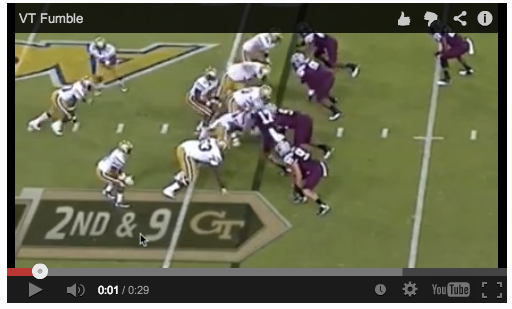 That doesn't look like a problem in the two clips posted from spring game. He's firing off the line much quicker.

Vad still shouldn't have fumbled that. He waited all day to react. Vad should have known to abandon the dive instead of waiting for Sims to get closer to him. Sims should have gone to immediately block 17 for VT. Players need to be smarter sometimes and recognize what's happening. Sims just ran right by the blitzing player like Vad wasn't in trouble.

Got to give credit to VT17. He made a game-changing play by slapping the ball out. Great physical ability and great awareness on his part to do this. Bud had them running that blitz to perfection as well. The DT and LB were both very quick off the ball and the LB was right in the DT's hip pocket. All that being said, if Vad doesn't lose the ball, we've still got a good play going.

I'm worried here. Bud's defenses are usually way better than ours, and he'll try the same thing again this year.

Can someone just post the Spring Game to the internet for those of us without ESPN3? If you get sued I've got your back.

The Spring game will be on ESPNU tomorrow night.

thwgjacket said:
Can someone just post the Spring Game to the internet for those of us without ESPN3? If you get sued I've got your back.
Click to expand...

thwgjacket said:
Can someone just post the Spring Game to the internet for those of us without ESPN3? If you get sued I've got your back.
Click to expand...

I thought the spring game was free on ESPN3

pckl300 said:
I thought the spring game was free on ESPN3
Click to expand...

I think Byerly did a good job of reading the "VT blitz" here and getting out of the way. The play would have had positive yardage if not for IJ "knowing" the play and coming up for the tackle.

Longestday said:
I think Byerly did a good job of reading the "VT blitz" here and getting out of the way. The play would have had positive yardage if not for IJ "knowing" the play and coming up for the tackle.

How did he "know" the play is the question. If this is play action, then Smelter runs by him and Timmy hits him for a walk-in touchdown. I actually LOVE seeing this aggressiveness from IJ if it's for sound reasons. If he "knew" the play because he was able to read Run Block by the OL rather than Pass block, then that's a sound reason to come up that hard in run support, confident that he's diagnosed the play correctly. That is what makes a player play fast much more than a 40-time. So, if that's the case, HECK yes, give me some more of that Isaiah Johnson. I hope he plays like that during the season, and is able to diagnose other teams' plays like that.

Next question is how do we keep this from happening to our offense? To me this has been one of our biggest problems. Other teams are getting MUCH better at diagnosing our plays. This wouldn't be as detrimental on a straight TO because we've still got blocking angles that should give us a lot of advantages and numbers. We can run straight at them and get yards. But, with a counter like this, it's slower to develop and if defenders diagnose it early they can get to the point quicker than the blocker can get the angle on them. This is why it is SO IMPERATIVE that our blocking start out looking the same for a play like this or a play-action pass off of this play. A few people are clamoring for different pass-blocking scheme/fundamentals, but that would take away from the biggest advantage our offense has in the passing game - do that and there's no more open WR's. Then, it would require a QB who can thread a needle, which is not what QB's in our offense are going to be about. For obvious passing situations, I can understand the argument, but might disagree with what constitutes "obvious passing situations".

It's really up to Coach Johnson to deal with plays like this, and the guys he relies on upstairs to recognition. And, he does this as well as anyone. He's going to call the same play later, but with play action, and it'll give us a chance to hit a big one. We've got to be able to make the defense pay in our play-action game. This is what CPJ harps on when asked about the passing game. He always says, we don't necessarily need more yardage, we just need better efficiency. We're ok at it, but if we could get better, we'd have a much better chance to beat any team we play. There are so many opportunities in the passing game every game that we don't take advantage of, either because a QB doesn't see the open man, the OL doesn't give him time, QB makes a bad throw (this has gotten better over the years), or the WR drops it.

This is where it also helps to have a player with some special ability at QB, either the ability to break that tackle or at least push forward for a few yards in the 1-on-1 situation with a tackler ... OR, a guy with special elusiveness to make that guy miss. Maybe Timmy and/or Justin can make these plays better than last year.

Man i hope we can beat them VT castrated turkeys this year!

The way I see it is that we should have not had ANY issues with the "VT" blitz by now. What I saw at the Spring Game was a half-answer to the issue and not really a perfected answer.

I'm still not sure what our strategy is to counter the B-gap blitz. It has to leave the D vulnerable to something if you guess right and are able to pick it up. I'm just not sure what we are doing to pick it up or render it ineffective.

dressedcheeseside said:
I'm still not sure what our strategy is to counter the B-gap blitz. It has to leave the D vulnerable to something if you guess right and are able to pick it up. I'm just not sure what we are doing to pick it up or render it ineffective.
Click to expand...

It's the same thing as a 5 man front, so you would attack it the same way as you would if the defense just lined up that way rather than blitzing to it. The BIG difference and advantage to the defense is that it puts a super-fast guy trying to squirt through that hole rather than a big ugly trying to power through it. So, we've got to attack speed with speed. We've got to have an OT out there with the ability, training, and tenacity to take that guy out. Chamberlain couldn't do it last year. Can he do it this year? I think he's getting better. I also think he's got the ability with his quickness. He just needs more training to recognize early and know what angle to take to cut him off. And, he needs the DESIRE - to have the mindset, "We win this game if I make this block. I'm going to hurt this guy. He's never going to want to come through here again and Bud Foster will regret calling this defense again." CPJ and CMS can help with the first part and CDM can help with the second.

Also, that blitzer has to be shaken of his confidence of the snap count timing. One extra millisecond of hesitation on his part can be the difference in a big play for us or them. Seems like we're working on that too with the no-huddle, motion of AB then reset, and going on a different count. All good things.
Share:
Facebook Twitter Reddit Pinterest Tumblr WhatsApp Email Share Link
Top