jgtengineer said:
My favorite moment isn't actually from a game we won. UGA 2010, nesbitt is out washington is n his 3rd start. We are losign 35-34 and uga is driving at the end of the game. Johnson tells our defense to let them score as that is the only chance we have at getting the ball back. We score. Now on TV this moemnt wouldn't be felt. But in the statdium with 95000 screaming dwag fans.. the stadium goes suddenly silent before the extra point. When the realize. they have not stopped us all day, there's about 3 minutes on the clock and now we have a chance to tie it. I miss that. That fear.
Click to expand...

I was there, in the UGA student section (don't ask). It happened just as you describe. After the mutt score, I said to the group around me "We did that on purpose." Too bad we were not able to capitalize.

roadkill said:
I was there, in the UGA student section (don't ask). It happened just as you describe. After the mutt score, I said to the group around me "We did that on purpose." Too bad we were not able to capitalize.
Click to expand...

I was behind the i think its there west endzone in the alumni ticket place because my dad's friend had tickets but they couldn't use them so i went with a dwag friend of mine. Lets jsut say from the first fumbeld kickoff return and us taking the lead to that moment they were expecting to lose and bemoaning richt.

When did the freshmen Thanksgiving game finally end?
I think 1978 we were short players for that game, I was approached about walking on to fill in. I was 6’4” 240 and in great shape, pretty quick, maybe could play DE. But was busy trying to finish an EE degree and working my way through school. Oh well, would have been fun.

While I have been in person for many of the losses, dating back to Herschel, some of my
favorite wins, where I was in attendance, are:

1989 - went on a blind date, with a lady who became my wife - still the most special

2014 - the kick and the pick. Sat with a few tech fans surrounded by hostile ga uglies. Loudspeakers from the uga band in our faces blaring non-stop. (I wish our band would return the favor in our home games). People getting in our faces after the fumble return for a TD on a play that should have been called down, or even our TD. Watching the uga squib kick w 18 seconds remaining and tech then moving into FG position. Listening to the stunned silence in the stadium and the roar of the small tech crowd when Butker kicked the FG. My oldest son’s roommate was a student manager and was in end zone of the kick, and watching him dance around on national TV as he retrieved the ball.

Watching tech get a 6 point lead in OT and miss the xp, watching the uga crowd rise up as they drove the field, then stunned silence with the pick. We stayed a long time after the game and enjoyed watching the players perform maintenance on the hedges.

Mine was getting some halftime action from the Mrs and coming back to find Roddy running up and down the field.

TheDanielHordShow said:
Mines 2014. People forget that we lost a heartbreaker in 2013, and we had to overcome so much to beat them in 2014.
Click to expand...

I was there to witness "the kick and the pick."

t's a there way tie. The kick and the pick and the 1999 game are hard to beat. However, I know I've never been happier at Grant Field then I was when Tech beat Clemson in 2011. Unrankeed against the #5 team in the country with two of the best players in Clemson history in Taj Boyd and Sammy Watkins. And we still beat them. And they were very, very lucky it wasn't worse. I stood up in my seat and yelled, "I love to beat Clemosn! I love to beat Clemson." And I still do. 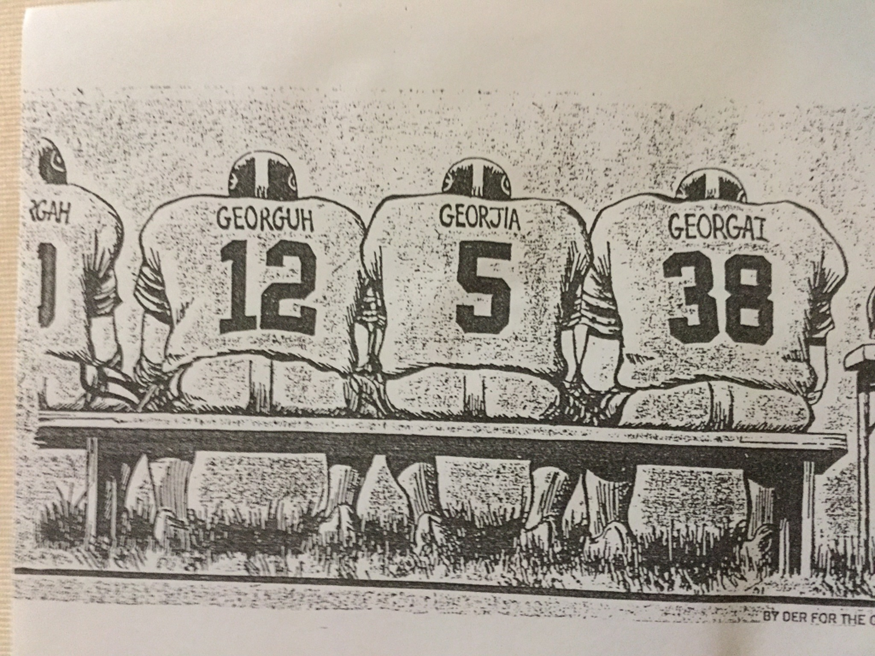 My favorite COFH moment is the Harrison Butler field goal to tie uGA in Athens. I will always hold that moment close to my heart. 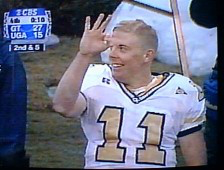 Was one for the ages. But I remember when we beat them in the mud during Peppers wishbone years. I was shooting doves with a bunch of Georgia fans. Listening to Ciraldo on the radio then turning to Munson after the win was guaranteed.

I was at that one. 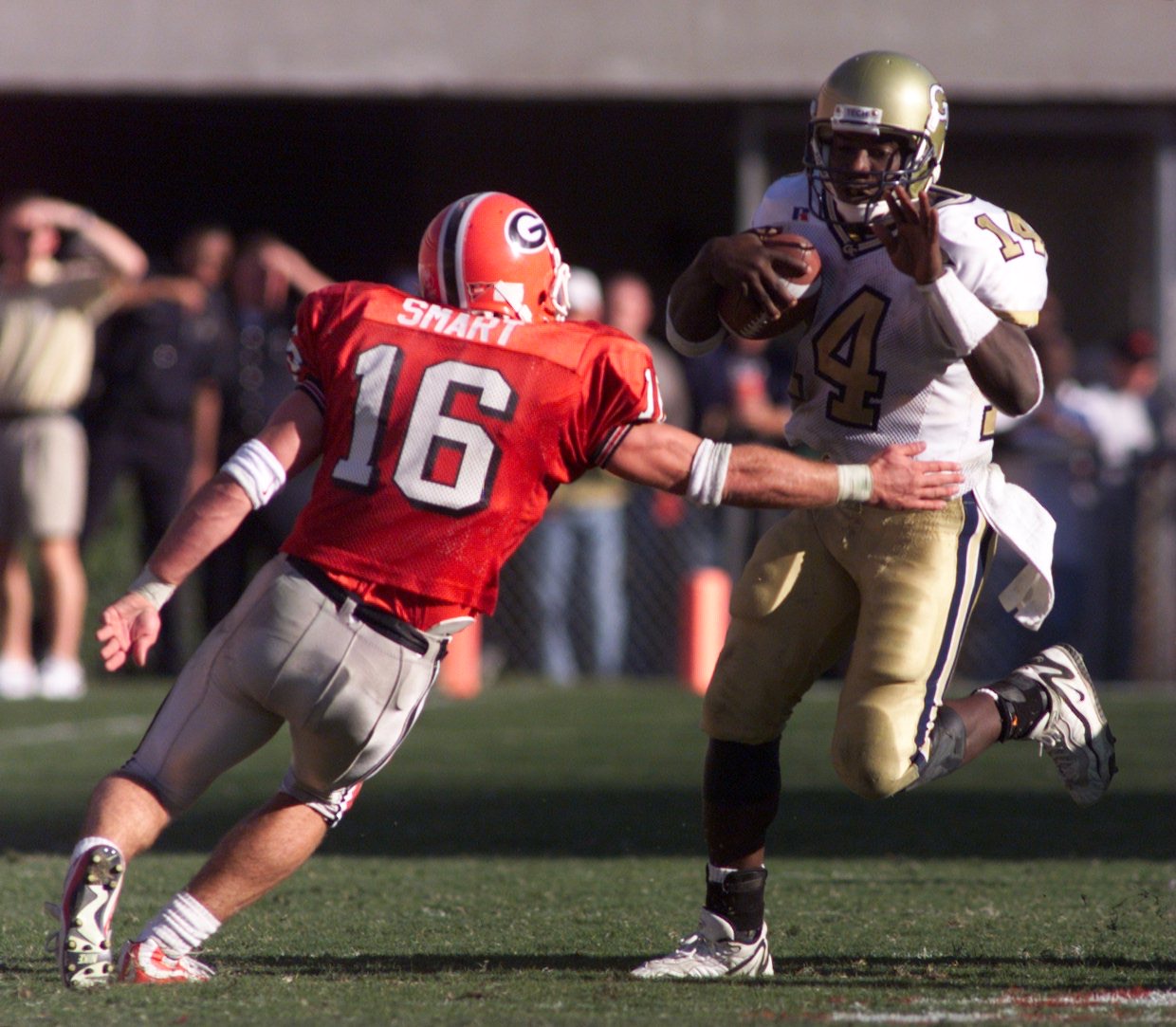 That's how I imagined great clips would try to tackle.

Mine would be the Kick and the Pick in 2014. I was watching at my parents' house with my older brother who was a Tech grad. After the pick, we started dancing and hollering in the living room. But what stands out to me about that game happened a few months ago. I was at a local FCA banquet dinner where Richt was the guest speaker. He started off mentioning how a lot of georgia fans always come up to him with questions years later, and one of his most asked questions is "Why did you squib the kick against GT?" The fact he still gets asked this question to this day means that game still lives in the head of georgia fans rent-free, is what stands out to me the most.

bigrabbit said:
When did the freshmen Thanksgiving game finally end?
I think 1978 we were short players for that game, I was approached about walking on to fill in. I was 6’4” 240 and in great shape, pretty quick, maybe could play DE. But was busy trying to finish an EE degree and working my way through school. Oh well, would have been fun.
Click to expand...

Favorite moments ...
Roddy's run to the hedges:
"Stays inbounds. ... still inbounds! 15, 10, 5! Touchdown!"
And of course, the kick and the pick.
Can't remember if it was 14 or 16 but we were the last two out of the stadium, yelling our heads off.
In 08, we walked out of the stadium, into the mist, laughing hysterically.
In 08, I was sitting in a box at Sanford Stadium that was about half and half Tech and Georgia fans. Some of the Tech fans were ex players and at hafltime, they asked me what Johnson was doing. I said, first, he's taking a leak. Second, he'll spend a few seconds peeling the paint. Then he'll remind them that they can beat these guys if they just play like they're supposed to.
When we tied it at 28, we were going nuts.
And it was dead silence all around us. The Mutts had no idea what just hit them.

In 2014, on the second down play for the dwags in OT, I decided to watch what Quayshawn was doing. So I noticed he's running off the field and I didn't understand why. It dawned me on quickly - we picked them off. And this thing was over.

Not going to Athens this year, though.

The last all freshmen game was Thanksgiving Day 1973.... 30,000 in attendence... we won to complete 7-0 season.
1973 was the first season Freshmen were eligible to play varsity... Pat Moriarty (google Pat, Baltimore Ravens, BTW) was only freshman who played much for our varsity that year
Pat also "missed" Rudy in '75, not our RT.....although honesty compels me to mention that our RT blocked nobody, all day, in that game......