Mr. Deon Hill of Phenix City Alabama was rated a 3* Running Back when Charles Kelly recruited him out of Central HS; the same high school from which Orwin Smith was recruited to Tech the year before. Rivals only lists his other offers as having been from Tulane and Utah State (covering an oddly wide expanse geographically speaking). Regardless, he had a great HS career at Central where he rushed for 1,587 yards as a senior and scored 18 TDs which tied the school record. He was named All-State in Alabama and--possibly most significantly--Deon was named a Team Captain.

At Tech Hill redshirted his first year and then in 2011 he played in every game on special teams (where he excelled) and as a back-up AB. Deon had a knack through his entire Tech career of making the most of every single opportunity he had so his only rushing attempt of the season fittingly scored a TD. In his RS-Sophomore year of 2012 Hill again played in every game and had 10 chances with the ball (6 runs and 4 receptions) and once again he made them count, to the tune of 6.7 ypc and a TD on a pass. That TD was particularly memorable as it was a 10-yard score that gave the Jackets a 17-14 lead against the Hokies with 44 seconds left in the game (which Tech lost in OT).

In Hill's RS-Junior season of 2013 he only played in 9 games (started 3) because of the onset of an incurable disease causing chronic inflammation of the GI tract. Like with others in his recruiting class Hill was suddenly faced with significant adversity, and to make it worse it had nothing to do with the physically demanding and rough sport of football or the rigors of the academics at Tech. But, also like his confreres, Deon would not be deterred or defeated: “The feeling of the disease felt pretty bad,” said Hill. “I got real discouraged at times, but I try to keep a smile on my face no matter what.” Even battling a serious disease just to be able to play at the highest levels of college football in no way changed Hill's personality and character from a "team-first" attitude towards one of "look at me" or "woe is me." In the same article just quoted his head coach had this to say: “He's never tried to use that as a ‘Hey, look what I've done, look what I've overcome, or I'm battling this,'” said Johnson. “He's just showed up and played like he always has.”
As a result, Hill was still able to average 9.2 yards a carry and tack on another TD reception for the 2013 season.

Deon saved the best for last. In his RS SR season of 2014 he played in all 14 games and had a career high in chances (34 rushes and 10 receptions) resulting in 6.8 ypc and 3 TDs and 17.8 yards per reception with one TD. Once again that TD catch was a big one as it was a game-winner with 23 seconds left against GA Southern. Another significant TD for Hill came with 11:43 left against Miami from 8 yards out on a 4th and 2 to effectively put the game on ice. These two scores also occurred on the same patch of goal-line grass as discussed by Ken Suguira here and Ken breaksdown the Miami TD here. He even received national recognition for his battle with Crohn's as he was nominated for the Orange Bowl-FWAA Courage Award

His Twitter account reflects his humility as it informs us that he clearly puts family first (their picture and not his dominates the header) and that in his opinion he is: "Just a guy with big dreams." He is off to a great start at achieving his big dreams after graduating Tech with a degree in Management and Yellow Jacket fans everywhere have no doubt his great achievements in life have only just begun.

Made some big plays for us this year. Great attitude.

Some pics of Deon Hill. 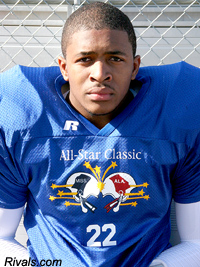 A familiar sight on the sidelines: 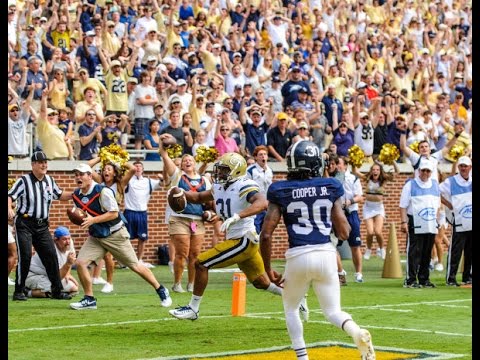 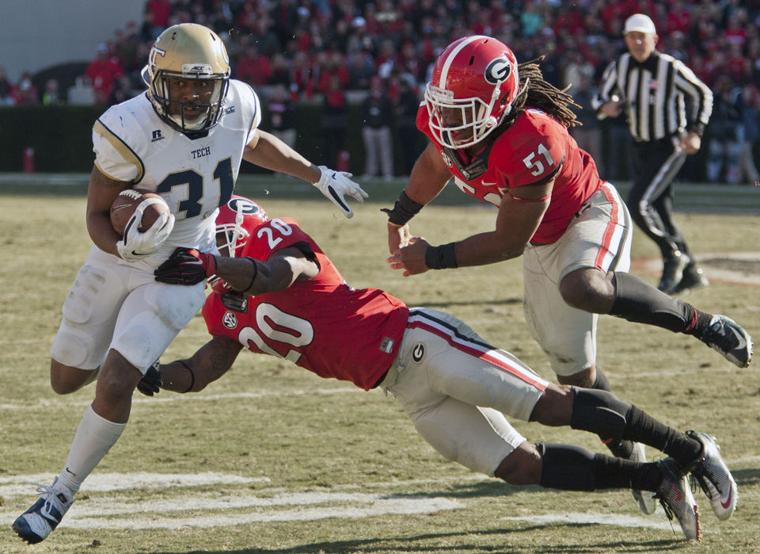 There are a number of good videos featuring Deon available online.
This is his recruiting video:

A informative and funny one featuring Hill and B.J. Bostic exhibiting some of that team chemistry back in 2012 that paid such dividends for both as seniors:

What should have been a game-winner:

Media Days hamming it up with CPJ: (had trouble embedding this one)

Deon was a 3rd down conversion machine all year especially against UGA. Without him we don't beat UGA.

Here are some Senior year videos.

The Game Winner against Southern:

Post-game presser for the Southern game:

The nail in Miami's coffin:

Nice series of posts featuring our senior class. Maybe not the top rated of talent, but most had tremendous character overcoming adversity.

They were a great senior class.

One of my favorites young men. What a display of courage and perseverance! All you have to do is look at his want to in his blocking, it tells you all you need to know about Deon

Another great Jacket that overcame extreme hardship to have an outstanding senior year! We have a friend whose adult daughter has Crohn's so know how horrible it can be. Thank you Mr. Hill for the excitement you displayed on the field and the example you set for GT.

Deon had to overcome one of the most debilitating diseases in the book and had to have an extensive operation to do it. As with many of his teammates, no one would have taken it badly if he had decided to stop playing; I rather expected it myself. But, like Shawn Green and the others, Deon is tougher then I am. He stuck it out, worked hard, and recovered. It is too bad that he was afflicted mid-career since he was, imho, the most talented of our ABs overall. He would have been as goto a guy as Orwin was if he had not been sidelined for so long. As it is, however, he capped his career off with his best season and one where, as the clips above show, he was indispensable in winning several of our games.

Thanks for the memories, Deon, and good luck for the rest of your life!

Location
ends of the earth

Hill, Bostic, Perkins, Days, Isaiah Johnson...what do they have in common? They all had to overcome injuries and difficulties, and EACH one of them persevered and EACH one of them played a HUGE role in this year's success. Will we ever again have such a group of "overcomers?" They deserve the accolades. They deserve the Orange Bowl victory. We are lucky to have had them, and to have watched them "grow up" on the Flats.

Never give up. Somebody couldn't write a movie script about this philosophy any better than the reality that happened with this senior class. Thanks Deon for being a Jacket!

Thanks for everything Deon, you've made us all proud!

I have enormous admiration, respect, and appreciation for Deon Hill. Great player and outstanding person who does Tech proud.

Life is all about choices and many of those choices are chosen simply because they are easier. It is always impressive to see someone make the greater good more important than themselves. The easy way out was for Deon to use his legitimate health problems to leave the team. The hard road was to persevere. He had no reason to believe that he would be involved in so many spectacularly important plays this year, after all we were loaded at the a-back position, nor could he be sure that he would be the go to guy in critical situations but he pressed ahead anyway and now will always be remembered for those great moments.

I was inspired by his effort this year as I'm sure were many others. Thank you Deon! I pray you will have a truly blessed future!

For those interested, Deon has started full-time in a sales position at Kraft Foods. I can tell you that as solid a football player Deon was, he is 1000x a better person and was probably the most well-liked player in the program.

GaTech4ever said:
For those interested, Deon has started full-time in a sales position at Kraft Foods. I can tell you that as solid a football player Deon was, he is 1000x a better person and was probably the most well-liked player in the program.
Click to expand...

No doubt about that.