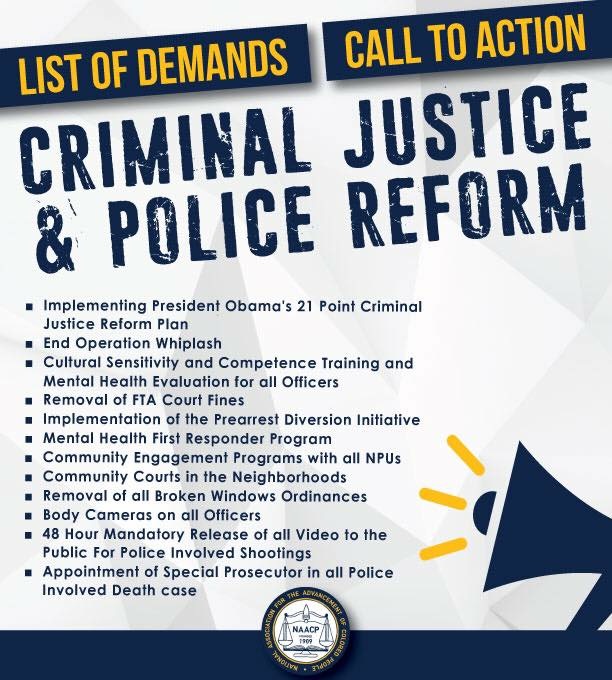 -bullet one already implemented (much of it retread of former policy goals, most of it well intentioned, lots that just make me sigh and smh). Too much to go into and not a line of thought I'm inclined to delve into)
-bullet 2 done http://atlantaintownpaper.com/2016/09/apd-wraps-operation-whiplash-releases-statistics/
-bullet 3 is part of bullet 1 and all officers must pass psyche evals b4 being hired
-bullet 4 Remove FTA.....why in the world????
-bullet 5 Great "tree hugger" ideal..probably more difficult to implement than many think, what agent or agency will determine the specifics. Cops shouldn't be relied upon to provide mental health treatment...they should be enforcing laws...This is an issue for the courts imo.
-bullet 6 What's this? For 1st Responders or for 1st Redponders to utilize toward the public?
-bullet 7..Ok
-bullet 8 uh.....no
-bullet 9 ok but don't complain when the slums start looking slummier, don't complain when property values crash in the areas, don't complain when your neighbor erects a sawmill in his back yard and inundates your property with noise, smoke, and visual blight.
-bullet 10 Yes...but recognize officers shouldn't have to keep em rolling 24/7...no one needs to see officers perspective when relieving themselves etc, engaged in personal private communications etc....also recognize they do malfunction at times and a malfunction can but doesn't necessarily equate to a cover up
-bullet 11...uh no. No evidence should be mandated to be released at a set time when such could harm an investigation or court case...and yes officers are entitled to equal protection under the law just like you and me.
-bullet 12...ok but it's gonna have to be a big office with a lot of prosecutors available. Should probably have a close relationship to the GBI (which now handles the vast majority of officer involved shootings), or similar state agency for other states.

Um "Releasing inmates for non violent non felony offenses." That is too broad a statement for me. Just let everyone go free?

bwelbo said:
Um "Releasing inmates for non violent non felony offenses." That is too broad a statement for me. Just let everyone go free?
Click to expand...

basically the only people that this applies to are non-violent drug related offenses.

All that would be fine but in cases where there are 2 or more witnesses automatic firing squad of any crime or you will never deter the criminal element.

smathis30 said:
basically the only people that this applies to are non-violent drug related offenses.
Click to expand...

Players don't like cops or the criminal justice system. Maybe cops should stop oppressing these players by providing "oppression/security" at games. Like the officer involved in this incident outside a CFL game.

Oh btw...the Isis inspired attacker was a refugee immigrant from one of the "Trump banned" nations listed in the recent travel bans.

Interesting side note. I recently stumbled across some GT Gold Rush pictures, and noticed the girl who did the kneeling protests was not in those pictures. So I went to the GT Gold Rush website, and she is not on their roster. So then I went back to her twitter account to see if she got kicked of the team or quit or whatever...it turns out that picture of her kneeling was from October 1st, 2016. It was not this year. She re-posted it for some reason and never pointed out it was from a year earlier. Obviously it was a much bigger thing around this time of year so social media just ran with it. Just thought all that was interesting. Doesn't really mean anything to me, so I haven't spent any further time to see if she graduated, was kicked off the team, or any of that stuff.

These protests began over the perception of widespread police brutality targeting minorities. I think the vast majority of this criticism is not corroborated by stats or facts. If you disagree I invite you to participate in the "cops" thread here in the Swarm lounge.
Share:
Facebook Twitter Reddit Pinterest Tumblr WhatsApp Email Share Link
Top