What GT does - Pass Blocking

I know, I know, you guys want to see the fancy stuff, RPO's, route combinations, SCHEMES. Well, tough titties. The game is won and lost at the Line of Scrimmage. We've talked about the run game that you guys use. Here's what you guys like to do in pass protection. Honestly, it's really not that different from the run game. You're either doing Man-to-man, or zone, or some combination thereof.

As with the rest of this series, I'll show you a diagram, and then some examples of you guys using it with game footage. What I show you is going to cover the overwhelming majority of your plays. I fully expect this to be the least popular of this series, but it's arguably the most important if you want to know why you're winning or losing games.

The first thing to understand is why on every play you see your center pointing. What he's doing is identifying the "Mike" (aka, the middle linebacker). What you need to understand is that the "Mike" might not be the Mike. Like, depending on alignment, he may be pointing to an outside linebacker, or even a nose tackle, or a walked up safety, or whatever. And he's going to go "43 is MIKE!!".

Why would he be pointing to a guy who is not the Mike, and claiming he's the Mike?

It's because it doesn't actually matter what position the guy is playing, what matters is who is going to block him, and depending upon what blocking scheme, it's a different person. That said, the blocking schemes often work, from the Mike-outward, and tells each person involved in the blocking scheme who they're supposed to be blocking, initially.

1) BOB
One common scheme that you guys run is called "BOB". This is essentially man blocking, and stands for "Big On Big" or "Back on Backer".

BOB blocking has essentially the assignments below. The Center is responsible for Mike, the offensive linemen are responsible for the defensive linemen, and if a 2nd linebacker blitzes, the first running back (if there is one)picks him up. If a 3rd linebacker blitzes, the 2nd running back (if there is one) picks him up, and so-forth. If there's nobody to block the rusher, that means that SOMEBODY isn't covered, and it's the QB's job to figure out who it is, and throw it to him in a hurry to save his own bacon.
Last edited: Oct 5, 2021

So then, here is your first play from scrimmage against Pitt.

Before the play, the center has identified 7 as the Mike, and the assignments are as follows.

The snap is delivered, and everybody goes to their assignments.

You'll notice that Mike is not rushing, which frees up the center to help on the closest/most dangerous block (in this instance the DT lined up in between the Center and the Guard) (this is called a "1 Technique". It is usually contrasted by a DT lined up between the Guard and the Tackle, called a "3 Technique")

A couple of frames later, things get interesting. Pitt is running the same game on the top and bottom of the screen, with their DT's and DE's doing "cross-twist". They're different, in that on the top of the screen, the DT is going first, and the DE is twisting around inside, and on the bottom the DE is going first, and the DT is twisting around outside. From the perspective of the camera, the bottom guy in each pair is shooting to the top, and the top guy is looping around to the bottom. In this instance, the G's and T's should hand off the first guy, and react to the twisting guy. In both instances, they should end up trading assignments.

As you can see, they did not. The RG/RT did a great job on the handoff, they're still in good position and have their blocks. The LG/LT did not manage, and the LT ended up getting beat across his face, and the LG ended up breakdancing while the DE ran free.

But wait….why is the center taking off to get the Mike? He's not rushing? He ought to be staying back and helping clean up the mess on his left, right? 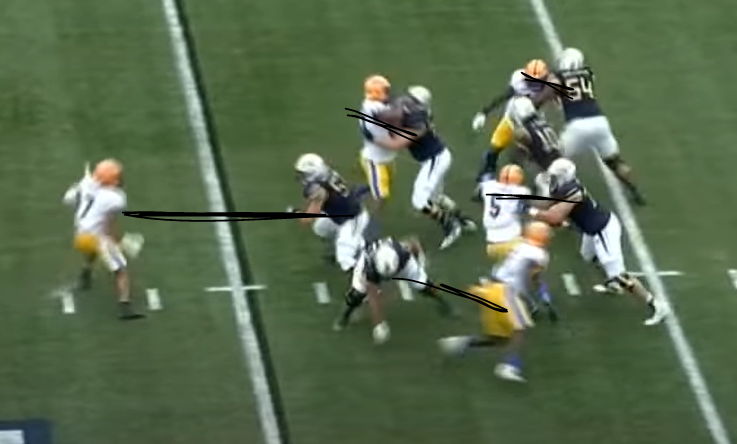 He's not because this is a designed QB run, and the center is on a "one one-thousand" count before he releases and goes to get the Mike.

The QB makes a good ID that the left side of the line is a ****show, takes off to where the play is well blocked, and gets big yards.

Nevertheless, this was a BOB Blocking Scheme.

And here is the play in video form:

Same thing on the second play from scrimmage, with worse results.


On this play, you'll note there's a back in the backfield. So the snap happens and lookie here, Mike looks like he's coming, so the center immediately comes off the help block to pick him up 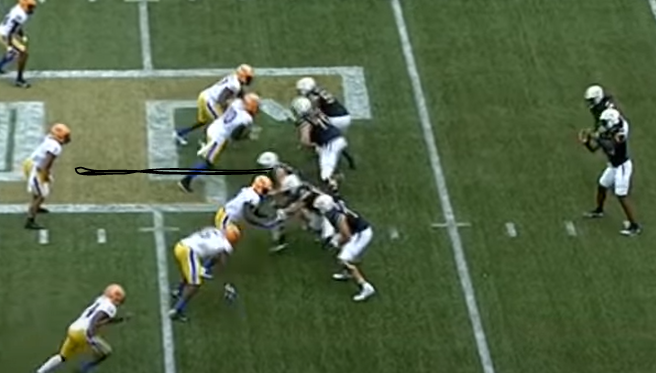 Unfortunately, Pitt is again running a twist on both sides of the ball (also, that ROLB is coming. If you'll recall, that means that back is involved. He's got to come across the formation and pick up that free rusher) 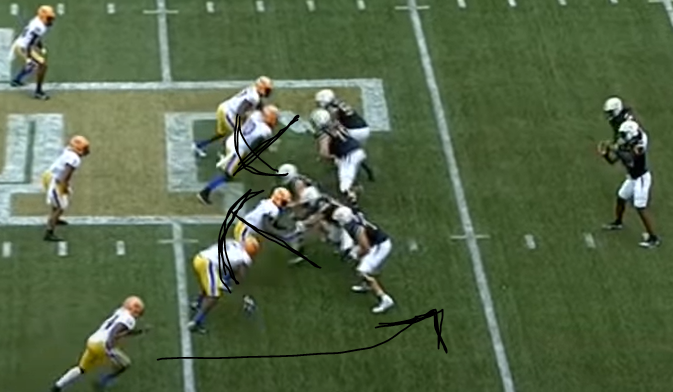 SO, again, the right side of your line has picked up the twist. The center has done his job and is going to pick up the rushing Mike. Your LT has engaged the twist correctly. The Back is heading to pick up 24….BUUUUTTTTT, your LG has COMPLETELY missed the fact that a twist has happened, and #5 on the defense has huge eyes and a throbbing woody as visions of shattering your QB dancing in his unblocked head. 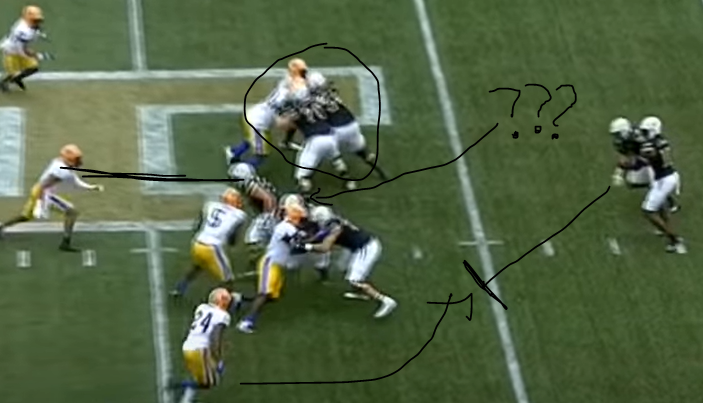 Good job by the back here getting all the way across the QB's face to make the block and not interfere with the throw. But, yeah, 5 is charting through unimpeded, and your LG STILL doesn't know what's going on. 2. Slide
Another common blocking scheme is slide protection. It's…about what it sounds like. The OL all slide in one direction (generally to the QB's blind side (often on a rollout). That, of course, leaves the end away from the slide side unblocked. It's the back's job to chop him down. It looks like this: This is primarily a zone concept. All the OL just blocks whoever shows up in their face. It's much harder to run effective twists/stunts against slide protection, because if you run away from an OL, he just goes: And figures you're somebody else's problem, which you are.

Here's a play from the 2nd quarter of the Pitt game: 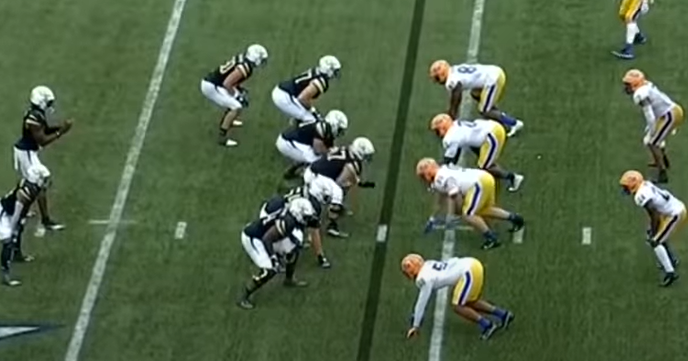 Watch how the whole offensive line just kinda slides right and ignores him. Now, to be fair, in this slide protection, they give the back some help with the H-back, but they're not blocking a defensive lineman with an offensive lineman, they're letting a back (or two) handle him. They actually do a pretty good job sealing him off. You should not that your Center and right guard do not cover themselves in glory, here: And here's the play in action: