Michael Johnson articles for this year

I thought these two articles were pretty interesting. Pretty cool that Coley Harvey wrote some of them..

CINCINNATI -- When the boos began to echo throughout Paul Brown Stadium early Sunday afternoon, several on the Cincinnati Bengals' 46-player sideline were bewildered -- stunned that such sounds were coming from the people who were their supposed supporters.

Defensive end Michael Johnson was among the flabbergasted. He couldn't believe that inside his home stadium, with more than 45 minutes left in a game his team only trailed 13-0, desertion had begun. Later that day, when talking to a few reporters in the Bengals' locker room following a 41-20 win over the Cleveland Browns, Johnson didn't hold back. To the boo birds who hissed their way through the end of the first quarter, his message was simple: Leave.

"If you're not believing and being positive, leave," Johnson said as he changed in front of his locker. "We don't need you. Because that's what we're about around here -- staying focused, staying positive and keeping our energy going. Negativity breeds negativity, and we don't do that around here." 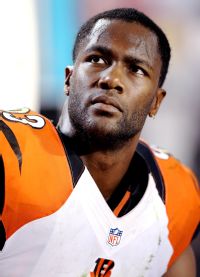 AP Photo/Paul Spinelli"If you're not believing and being positive, leave," Michael Johnson said on Sunday.
They were the raw, unfiltered comments of a man hellbent on weeding out his quarterback's doubters, and trying to discover a way to get others to keep believing in his playoff-bound bunch. With five games left in the regular season and postseason home-field advantage still a possibility, he was just trying to send a jolt through the fan base. He wanted those who comprise it to re-commit to the team he felt they ought to be cheering.

"Stay with us and believe with us," he said. "That's what you're here for. You're here for support. If something bad happens, that's not our plan. Stay positive, stay encouraging. We'll fight. Just stick with us a while."

Johnson's take, in theory, was a good one. I understand why he felt compelled to say what he did when he did and how he did. But given the way this season -- heck, the last 23 seasons -- has gone for the Bengals and their finicky offense, you can't fault the fans for finally letting some of their frustration out and criticizing the team they hold so dear.

OK. I'm very well aware I'm the new kid on the block around here, having just moved to Cincinnati to join the Bengals beat in the last three months. So for that reason, many of you might find it hard for a newbie like myself to speak intelligently about the tenor of this fan base and its relationship with the franchise. Still, I'm going to give it a shot.

Even though my time here has been brief, I have found that Bengals fans have actually stuck around for a while, and many will continue doing so. Whether you see the fans at Paul Brown Stadium or not, or whether you hear them booing or not, just know the fans still are paying attention.

The thing is this: Many of them have tried to hang tough and remain as committed as they possibly can, but the inconsistent play of the team's third-year quarterback has put some at their wit's end and ready to say sayonara. They are desperate to give someone else a try. Personally, I don't agree with that approach, but I certainly understand where they come from.

Within the past week alone, I've met a sizable sampling of Bengals fans around the city. Each one I conversed with had the same measure of anxiety in their voices. To me, they were saying, "We're tired of having pie-in-the-sky preseason expectations; we're ready to jump up, grab that pie out of the sky and eat. When can we eat?"

That's where the boos came from. And that's why I can excuse them. It makes perfect sense.

"That's why it's America. We all got a right to our opinions," Johnson said Monday, sticking by his postgame comments.

My opinions and Johnson's aren't the same. But then again, I'm not the one putting on a uniform and strapping a city's hopes and wishes atop my shoulder pads every Sunday.

Johnson and I have a little history -- good history. He's the lone Bengal who I knew in my previous reporter life. This time six years ago, while closing out my second fall covering football at Georgia Tech, Johnson was wrapping up his final year as a Yellow Jacket. The following April, the Bengals drafted him. Whether Michael knew it or not, he was one of my go-to players when I needed an introspective quote. Every beat reporter has a few. He was always humble, but also very honest and forthright. If there was something he didn't like, he'd politely let you know.

It was while I was hopping from player to player for postgame quotes Sunday that I wandered over to Johnson. While talking to another reporter, he was wrapping up his initial comments about the booing. Specifically, he was commenting about his offense's ability to bounce back after the boos and to still put up points.

"Resilience, resolve, we're some fighters," Johnson said. "We're some dog soldiers. All we can do is fight when we're told to fight."

Since I entered late and wasn't positive what those comments were about, I waited until the other reporter left and pushed him to go a little deeper. I wanted to make sure I understood what he was saying.

That's when he let loose. The quotes that have buzzed social media and the Cincinnati radio airwaves the past 24 hours came from those responses. The same honest and forthright player I knew years ago had arrived.

"I know everybody is used to me giving politically correct answers," Johnson said, grinning to reporters Monday, "but I was asked a question and I tried to answer it truthfully and from the heart. I don't have any regrets about that. Anybody that knows me knows that it's genuine."

While I side with those who argue fans ought to boo as lustfully as they please, I also can appreciate Johnson's conviction, his passion.

You can disagree with him if you want, Cincinnati, but that fervency is exactly what your playoff-bound city should embrace.

Michael Johnson's two long limbs are among the many reasons the Cincinnati Bengals have seven wins and hold a 2 1/2-game lead over the rest of the AFC North.

If it weren't for the 6-foot-7 defensive end's lengthy arms -- particularly his left one -- and his large hands, the Bengals may not have beat the Green Bay Packers. A comeback against the Cleveland Browns, likewise, may not have been possible.

In those games, Johnson got his hands up just when he saw Aaron Rodgers' and Jason Campbell's eyes drifting to the left as they looked to complete a pass. He got his hands on passes three times in those games.

"That's why it looks like that," Johnson said earlier this week, showing reporters his swollen and bruised left hand.

Against the Packers in Week 3, Johnson's pass breakup on fourth down fell to the turf, officially ending a Green Bay comeback bid in the closing minute. Cincinnati held on for a 34-30 win. Against the Browns last weekend, one first-quarter Johnson pass deflection near the goal line saved a would-be touchdown. Campbell was throwing to a receiver who had gotten completely open. Instead, the third-down breakup forced a field goal. Later in the quarter, another ball Johnson finger-tipped fluttered into linebacker James Harrison's hands, giving the Bengals an interception and turnover deep in Cleveland territory. After scoring on the ensuing drive, Cincinnati turned a 13-0 deficit into a 31-13 lead by halftime.

Johnson has six pass breakups in all this season, tied with Philadelphia's Connor Barwin for the league lead. As we kick off this Friday edition of the Morning Stripes, we look a little deeper at what makes Johnson so good at disrupting passing lanes with his long arms:
http://espn.go.com/blog/cincinnati-...deflections-passes-arms?ex_cid=espnapi_public


FYI: He credits going against cut blocking for improving his play

I think the most important thing he says in how it relates to our program is "negativity breeds negativity." I don't want us to turn into some rah, rah cheerleading fanbase, but I think it's a simple fact that the players face a lot of negativity from local media, (national media to some extent), other team's coaches during recruiting, school and administrators, etc. that they don't need us fans to pile on. I think if we as a fanbase can take a more active role in making Georgia Tech Football a positive thing to be a part of, it would go a long way for our team's overall psyche. We're too grouchy.

It's nice to see MJ talk about how his time at Tech helped prepare him for the NFL.