I just enjoyed this correction—Dallas’ LB can’t make the play, but he was doing what he was coached:

slugboy said:
I just enjoyed this correction—Dallas’ LB can’t make the play, but he was doing what he was coached:

This is the kind of thing I love reading about. I never played organized football and hadn't considered this problem for a LB or what they are taught to do. Cool to learn about the ROBOT technique.

This is pro, but Baldinger does amazing breakdowns. Here he is showing the Eagles obliterating the Falcons.
In this play, Grady Jarrett gets shoved to the side on a double-team and then the guard moves on to another player. The DE just gets destroyed away from the play:

Again, there are X’s and O’s, but mainly this is all about a D Line getting mauled. I think the Eagles could have run almost anything with how their line was crushing the Falcons.
It’s so bad, here’s another. Yeah, you can say something about coaching, but Dimitroff just, just, … I can’t even finish the sentence. In the X’s and O’s, you’ve got a pulling guard (Kelce), but that’s just an excuse for him to knock down several players. Nobody X’s and O’s the second and third player you flatten:

Here’s a screen pass. They pull half the OL out to the left. The game was a lot worse than I thought it was. How does he see this when most people miss it?

I haven’t seen him showing the Falcons porous line. Here’s a super pocket from a 3 man rush for Philly, though:

OOOOOOH. This is brutal:

These videos inspired me to look up Jordan Mailata as I do not follow the NFL much and had never heard of the guy. He is Australian (of Samoan descent) and did not play college football. He was a rugby player. Apparently the NFL has a scouting and development program for international players and he took this path to the league. If, of course, Wikipedia is to be trusted,

We could use one of those guys.

slugboy said:
We could use one of those guys.
Click to expand...

I know I titled this “beautiful plays”, but some people complain about our X’s and O’s but say nothing about this:


The Falcons pulled a guard AWAY FROM FLETCHER COX on a PASSING PLAY. Their hot route went RIGHT BEHIND where Fletcher Cox was STANDING.

My guess is that, with the element of surprise, Cox might think he’s not actually supposed to be in the play and leave of his own accord. Or run to the other side of the line, thinking the play is over there. I don’t know—this is a crazy play.

On the other hand, Matt Ryan is still alive in week three of the season.

More about the pass-rush-crazy defense that Matt Rhule (or his DC) set up in Carolina. These guys play the Falcons and their porous OLine twice. I don’t see how people are picking the Falcons to beat the Panthers when they can’t pass protect, but ¯\_(ツ)_/¯

It also has a non-beautiful view of Ben Roethlisberger just looking horrible. 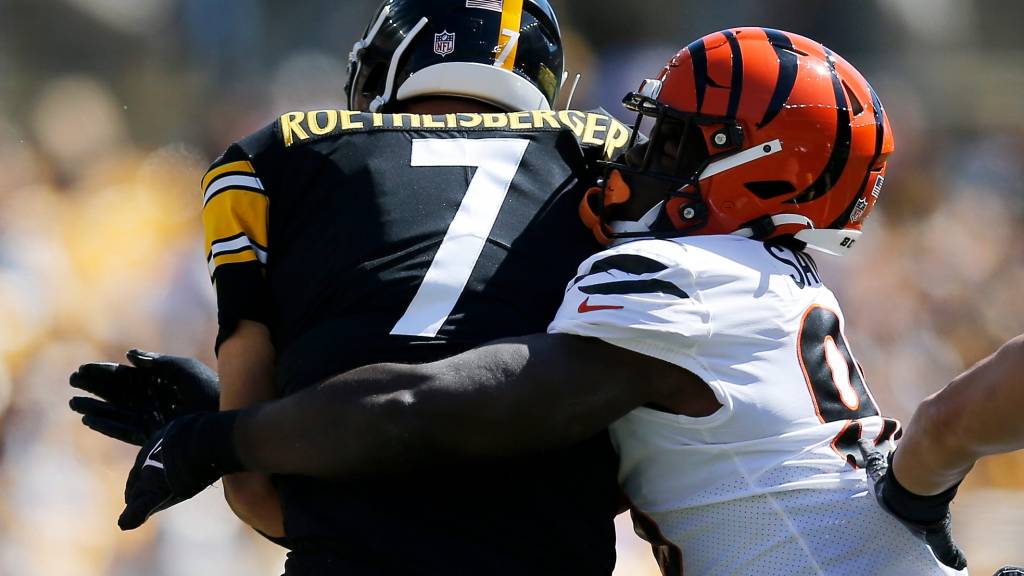 Four Verts: Ben Roethlisberger needs to hang it up and the Bears had a total meltdown

The Panthers might be able to sack the Bears and Steelers without playing them.

Still can’t forget UVa. French running that hook and ladder play at the end of the game(4th down or last play on the clock?)to snatch victory from our beloved Jackets, from the jaws of inevitable defeat. And Da-Feet stunk all week after dat.

@kg01, you are rubbing off on my vocabulary, good brother!

The dive into the end zone is pretty. Schematically, McKissic should have been tackled way short of a first down, but one missed tackle and he’s gone.
Falcons are a highlight factory. Unfortunately, it’s often for their opponents:

‍ a second quarter onside kick. This is a nice looking play where the end is all alone with the ball

Huge sections of this game were beautiful

Reverse with a blocker. (So many reverses there’s one man to beat and they don’t. This has a blocker for that “one man”)

App State developed a rep as an option offense over the years, but they defend it well here

“That Corner ain’t making the tackle, so I’ll block the safety instead”

Broken diamond set, A back drops the pass, but nice play

Slick 3O. I like how the WR sticks his foot and reverses direction to become the third option

For you option fans:


I like to think the GT counter is named for us (it ain’t, it’s guard-tackle, but I’m rolling with it ):

Your moment of Zen

Some interesting fronts from the Dolphins. This needs a lot of coordination and athleticism

I guess it’s basketball season—look at the play develop: